Dr. Galbraith, a child psychologist in South Wales appears to the public at large to be a genuine advocate for children who suffer from personal and family tragedy. Quickly into the early portion of this narrated version of White is the Coldest Colour, Dr. Galbraith reveals a dark sadistic side focused on his obsession with Tony, a small child. Creepy maelstrom ensues when Galbraith’s desires for Tony consume his every thought and movement. Jake Urry’s command of local diction combined with believable voiced characters makes this Thriller, while disturbing at its core, best listened to during the light of day.

The subject matter of White is the Coldest Colour is dark, but like any horrific train wreck, one cannot unplug from the suspense heaped on every page. John Nicholl’s background as a police officer lent stark reality to the pages and had me wondering what horrors my own neighbors might be capable of. I listened to every chapter with incredulous intent on uncovering what additional evils lurked in Dr. Galbraith’s secret cellar. Even his wife and children are unaware of the depravity lurking just below the surface of their quiet suburbia home.

The characters in Nicholl’s book seem all too realistic when their voices come alive through the expertise of narrator Jake Urry.  This book is not to be missed if you have the stomach for a predatory story of taboo proclivities.

I found both John Nicholl and Jake Urry during Mystery Thriller Week. This book is free on Kindle Unlimited, and Jake Urry’s narrated version is free with a trial Audible membership. 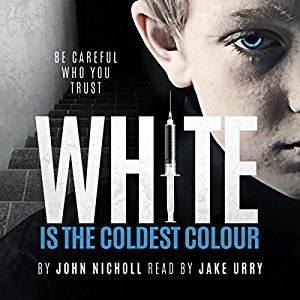