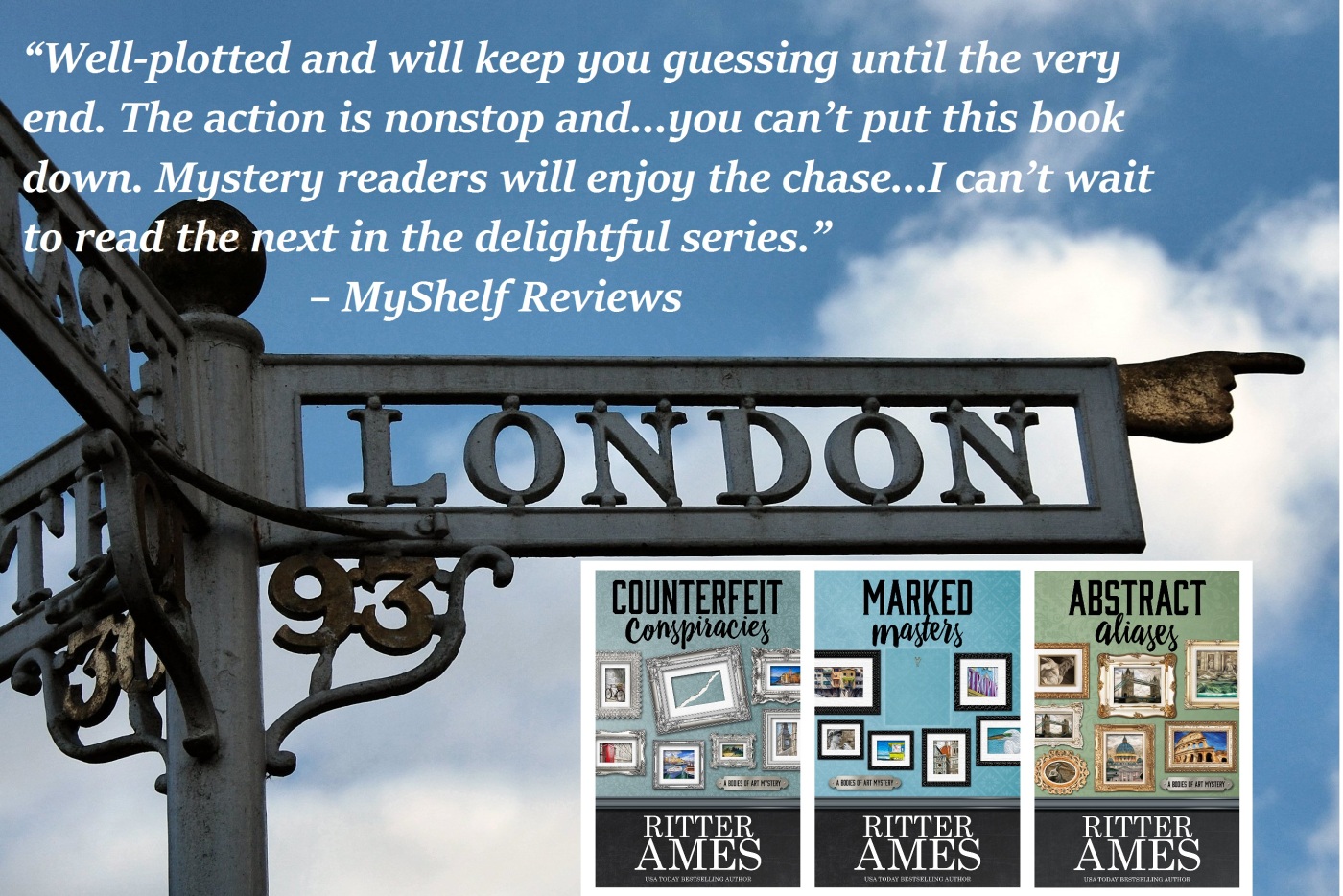 One of my favorite things about writing the Bodies of Art Mysteries is the fast pace and the global settings. Though, just because my main character is an art recover expert that doesn’t mean all the action takes place in museums. My characters don’t need a gym membership because they’re on the run most of the time. For instance, a scene in the first book in the series, COUNTERFEIT CONSPIRACIES, involved gunfire, London streets crowded with iconic double-decker buses, various-sized lorries (yep, we’d say trucks in the U.S., but lorry sounds much more Brit), and my characters escaping via a legendary black cab.

Until bullets shattered the windows.

To clarify, I’ve never had windows shot out of my cabs, but some crazy vehicle-related adventures have happened to me while visiting Jolly Old London-town. One event happened when we traveled there in spring 2008 with two 18-year-olds—who knew everything and constantly reminded us ‘oldsters’ we could just go off sightseeing and not worry about them. Fat chance.

Instead, tables got turned.

Armed with Oyster cards, we split up outside the British Museum. My husband and I headed for Churchill’s Bunker, and the two teens traveling with us headed for anywhere but an underground history site (they figured summer vacation meant no WWII stories). Instructions were repeated, wallets checked, and we divided keys to the flat we’d rented a block from Portobello Road.

Hours later, hubby happy and my brain filled with more WWII info than I’d ever hoped to acquire, we decided to forgo heading underground again and blinked our way to a bus whose number said it circled our route. I jumped on, used my Oyster card, and headed deeper inside, believing hubby followed. Wrong! He’d forgotten to reload his card that morning. An embarrassingly loud buzzer reminded of the mistake. Our indignant driver shouted at my flustered hubby.

“Don’t worry. I’ll grab a ticket outside,” I said, hopped off the bus, and ran to the nearby machine. Unfortunately, hubby followed.

As the ticket fell into my hand, the bus pulled away from the curb. We shadowed it down the block and I swear the bus driver laughed the whole way. 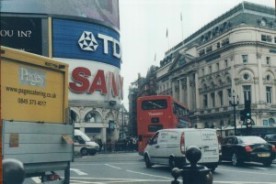 We caught the next bus. Since hubby now had a hop-on-hop-off-all-day ticket—and it was rush hour—we took a deep breath and prepared for a stop-and-go ride. Whilst he obsessed about every injustice, I relaxed and watched vehicular near-misses on almost a second-by-second basis. I memorized the looks of different vehicles from above, and marveled at the serpentine effect as they coursed over the traffic-filled roadway. Caught my breath at daredevil antics of cyclists who risked life and limb weaving through lanes to save hours from weekly travels. I gasped as too-large vehicles ducked down too-small alleys for shortcuts in the traffic kerfuffle.

Because of building heights and the traffic’s mesmerizing effect on me, I didn’t notice we were getting deeper into the city center—not farther from it. Hubby continued grousing about the first bus. Neither of us realized the problem until we were last ones on and our driver pulled into the covered bay.

Luckily, this driver was much nicer than the last.

“Take your tickets. You walk back there.” He pointed outside. “Buses will come and turn around. Catch the one you need. Fifteen minutes. Just fifteen minutes. Hurry.”

We hurried. We jogged. We saw a bus with the right number and flat-out ran. We leapt onto the bus—my Oyster card ready; hubby’s ticket in hand.

It was the same bus driver who yelled at my husband and then drove off without us.

I whispered for hubby to stay cool, pulling him toward the back rows.

Suddenly the driver recognized my spouse. “You have no ticket. Let me see your ticket!”

If hubby could have disappeared into the floor, gone through the asphalt and down to tunnel and train level, believe me, he’d still be there.

I stormed. “He does have a ticket! You watched us buy one at the machine, then drove off just as we were about to board. He has a ticket!” I waved the damned slip of paper.

“What is the date? What does it say?”

“It says today’s date. You know it does. Now quit acting like we’re trying to pull something and drive us home!”

At our seats, several people leaned over to tell how the driver was known for being a jerk. We learned just how far jerkiness extended about a half-hour later when, still some distance from our destination, a man in a brown suit boarded at a stop by a park. The man carried a briefcase and huge, fluffy, white cat.

I’m not sure what language they screamed in, but body language said Brown Suit was determined to bring the Persian aboard and our driver equally determined he wasn’t. There was pushing and shouting, and—of course—hissing from the cat. Finally, our driver turned off the bus, grabbed the keys and hurled the key-ring into the bushes. He shoved Brown Suit aside, and was last seen stomping back toward the city zone.

“What do we do now?” hubby asked. “Catch another bus?”

He wasn’t pleased, but I used my ‘do-not-argue-with-me’ look. At an outdoor café I bothered a nice couple who kindly directed us toward Portobello Road.

Eventually, we straggled into the flat, evening on the cusp of full dark, and had two mother-hen teenagers demanding to know where the heck we’d been! Didn’t we have any consideration? They expected more of us!

My husband started explaining, and I laughed. Yep, I giggled and guffawed—then promised full details after takeaway from the nearby Indian restaurant.

That’s how the action street scene in COUNTERFEIT CONSPIRACIES came to be. The scene in the novel is actually nothing like my true adventure, but after absorbing all the sights and sounds of busy London streets during that crazy ride, writing exciting fiction is easy.

Ritter Ames is the USA Today Bestselling author of the Organized Mysteries series and the Bodies of Art Mysteries series. When she’s not writing or brainstorming new mysteries Ritter is usually trying to get her favorite yellow lab to stay out of the pond, or keep her grouchy black cat from trying to give the dog away on Freecycle. Ritter would love to live on a boat and write from far flung locations around the globe, but the dog would constantly have to be fished from the water, and her husband and cat would just complain endlessly about the dog’s smell, so staying on land seems to be the only good option to keep her sanity and not get sidetracked from writing.

Ritter tries to blog regularly at http://ritterames.com/ and subscribe there to get the latest news about upcoming releases, and inside scoops on her characters and series. She uses her Pinterest boards at http://www.pinterest.com/ritterames/ to capture great places and ideas she wants to use in both series. Follow her blog and boards to learn more about Ritter and her upcoming books.